This EDP Wire summarizes the article “COVID-19 and shrinking civic spaces: patterns and consequences” by Felix S. Bethke and Jonas Wolff. The article was originally published in Zeitschrift für Friedens- und Konfliktforschung. The summary was written by Gunnar Placzek, the full version can be found here.

In response to the COVID-19 pandemic, a majority of countries worldwide have introduced severe limitations on public life and individual freedoms. Although generally considered necessary to save lives and protect health care systems from overburdening, these restrictions pose the risk of government overreach, thereby potentially boosting the global trend of shrinking spaces for civil society actors. An assessment of new data on governmental counter-pandemic measures as well as a closer look on exemplary cases provide evidence to answer the crucial question: Will the current restrictions have lasting negative impact on civil societies around the world beyond the pandemic?

The year 2020 has witnessed an unprecedented rise of governments imposing severe restrictions on core civic freedoms as a means to contain the COVID-19 pandemic, peaking between early February and early April. The measures taken range from limitations on the freedom of assembly and movement, if not an outright lockdown, to in many cases additional restrictions on further civil and political rights, including the freedom of expression. For the most part, it is widely recognized that even more drastic restrictions of human rights can be legitimate responses to the spread of the coronavirus (see reports by Amnesty International, Human Rights Watch and OHCHR). Yet, observers simultaneously warned of the serious risk that governments might make use of the very emergency situation for political purposes. In fact, as Doug Rutzen and Nikhil Dutta (2020) warned early on: “Pandemics are fertile breeding grounds for governmental overreach”.

This risk is particularly high because the COVID-19 pandemic has hit the world at a time when a significant number of countries were already moving in the direction of what has been dubbed “closing” or “shrinking civic spaces”. Since the early 2000s, politicians, civil society activists and scholars have observed a worldwide increase in government restrictions targeting civil society activists and organizations (CSOs) and limiting their space, autonomy and/or capacity.

Civic space restrictions amid the COVID-19 pandemic: an overview

Based on data provided by the COVID-19 Civic Freedom Tracker, the paper assesses governmental restrictions worldwide to differentiate between limitations of three key civil rights: the freedoms of assembly, association, and expression. The data (Fig. 1) illustrate the rapid pace with which governments responded to the pandemic with restrictive policies. Most restrictions were implemented during the last two weeks of March 2020. Moreover, it becomes clear that the global scope of civic space restrictions has reached unprecedented levels. Restrictions occurred across all world regions and focus mostly on assembly rights (e.g. by banning mass gatherings of citizens). 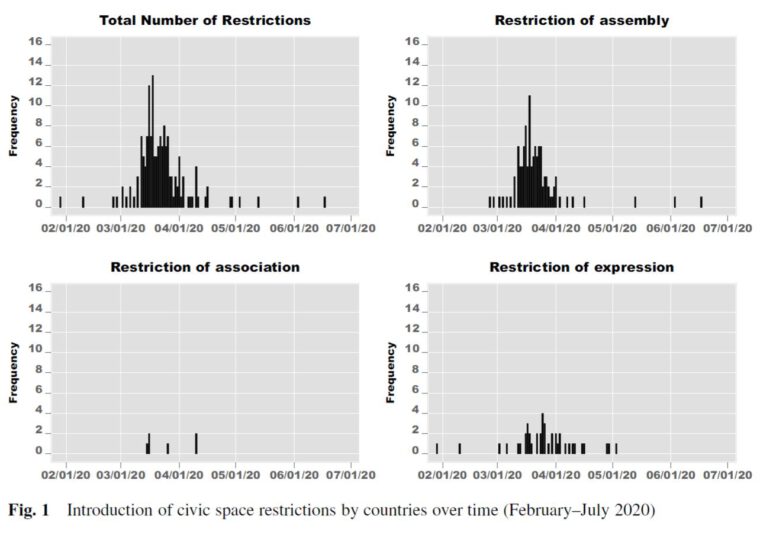 For the time period of February to July 2020, the COVID-19 Civic Freedom Tracker records 108 countries’ restrictions of the freedom of assembly. In contrast, the data show that only few countries implemented restrictions targeting the freedom of association. The total of six cases mostly refer to governments that enacted limitations for CSOs as part of emergency laws to respond to the pandemic. Restrictions targeting freedom of expression occurred more frequently, i.e. in 42 countries. Most of these restrictions either limited press freedom or enacted laws against the spread of COVID-19-related rumors. Lastly, it should be noted that restrictions often come as a package, i.e. the government issues a bill for emergency restrictions to extend its powers, which also restrict civic freedoms at the same time.

These numbers confirm that civic space restrictions in response to COVID-19 have been both widespread and far-reaching. Yet, they do not show the extent of governmental overreach. In general, the most common policy (restrictions on freedom of assembly) is closely related to pandemic control, as it directly enables the government to slow down the spread of the virus by enforcing “physical distancing”. The contribution to pandemic control of restrictions of association and expression is less direct, but even here cannot be ruled out categorically (e.g., when the spread of conspiracy theories undermines efforts to ensure “physical distancing” or the wearing of face masks).

Touchstones of justifiable civic space restrictions during the pandemic

In order to systematically assess the appropriateness of COVID-19-related measures, human rights organizations and experts have emphasized that government restrictions should be in line with internationally recognized human rights standards, i.e. they should be precise, transparent, proportionate, of limited duration, and subject to legislative and judicial oversight. The article analyzes this aspect of COVID-19-induced civic space restrictions with data from the V-Dem Institute’s Pandemic Backsliding Project (PanDem) dataset, which uses expert coding to identify the extent to which “government responses to the Covid-19 pandemic violated democratic standards for emergency measures” between March and June 2020.

According to this data, more than half of the 146 countries assessed have seen some (66) or even major (16) violations of such standards. Only 34 governments managed to respond to the pandemic without violations. Major violations have been recorded in otherwise most different countries. In addition to five African and six Asian countries, two are European (Hungary, Serbia) and two from Latin America and the Caribbean (El Salvador, Haiti). In terms of regime type, according to V-Dem, countries range from electoral democracies (e.g., El Salvador and India) all the way to closed autocracies (e.g., China or Saudi Arabia). Notably, major violations occurred mainly in countries that had been characterized by shrinking civic spaces already before the pandemic hit (such as China, Egypt, Hungary or India).

In order to assess the ways in which responses to the COVID-19 pandemic affect civic space, the authors look at three dynamics: the immediate consequences for civic protest and  freedom of expression as well as  the potential mid-term impact on civic space in broader terms.

The most visible immediate consequence of the emergency measures has been the far-reaching closure of the physical civic space to assemble, at times enforced violently. The global wave of protests in recent years has thus been interrupted, but this is likely to remain a temporary dent. Lebanon is a good case to illustrate this dynamic, as protests have returned at a notable rate and scale despite difficult conditions.

The case of Cambodia is a good example of how COVID-19-related restrictions can limit the freedom of expression. According to the International Federation of Journalists, emergency legislation approved on 10 April 2020 granted “the government powers to monitor communications, control media and prohibit or limit the distribution of information deemed to trigger public fear and damage national security”. This adds to reports of several cases where people, including journalists and members of Cambodia’s dissolved opposition party, had been arrested on charges of spreading false information before the new legislation.

In order to explore the potential mid-term impact of COVID-19-related restrictions on the further evolution of civic spaces around the world, three questions are of particular relevance. The first question is whether restrictive measures adopted in response to the pandemic remain in place beyond the emergency situation. Second, even if restrictions expire or are repealed, do persisting changes to the legal order and/or the public discourse facilitate the renewed imposition and/or justification of restrictive measures in the future? Third, does the overall response to COVID-19 contribute to a broader process of autocratization of the political regime, which involves—among other things—a (further) shrinking of the civic space?

Hungary combines negative developments in all three regards. In March 2020, a national “state of danger” was declared by the government and later extended indefinitely by parliament. While this “state of danger” was lifted in June 2020, some of the restrictive measures have actually remained in place—such as the penal prohibition of “scaremongering” through misinformation in situations of public emergency, which was included in the country’s Criminal Code. What is more, legal changes that were adopted simultaneously enable the government to take, in response to the current or any future health crisis, all measures deemed necessary without parliamentary approval, including restrictions on the freedom of movement or the freedom of assembly. Overall, these persisting changes to the legal order further contribute to the gradual process of autocratization that Hungary has been experiencing since 2010.

Existing comparative assessments of emergency measures adopted in response to the COVID-19 pandemic also show that “many governments have demonstrated that it is possible to safeguard rights while effectively countering the virus”. As the case of Germany suggests, the legacy of the (first wave of) anti-COVID-19 measures might even be positive for civic space under specific circumstances. Initially, in line with the nation-wide “contact ban” which proscribed public gatherings of more than two people, most German states (Länder) generally suspended the freedom of assembly. While many local authorities implemented this norm by not permitting any demonstrations (and, in some occasions, even by forcefully dissolving unauthorized protests), the Constitutional Court ruled on 16 April that “health concerns linked to the coronavirus pandemic are no grounds for a general ban on demonstrations”, which would violate “the constitutional right to assembly”. As a consequence, it is highly unlikely that, in case of a renewed tightening of the anti-COVID-19 measures in Germany, authorities would again issue a blanket ban on protest.

Governmental counter-measures to the COVID-19 pandemic have led to an unprecedented wave of civic space restrictions all around the world. While 64 countries demonstrate that it is possible to tackle the spread of the virus with no or only minor violations of democratic standards according to the PanDem data, the paper summarized here confirms that in many other cases the risk of government overreach is real. COVID-19 already seems to be contributing to a further de-democratization or autocratization of countries that have already been on this trajectory before the pandemic hit.

However, there is still a note of optimism. If we look at preceding events which led to an accelerated shrinking of civic space like the counterterrorism measures and discourses in the aftermath of 9/11, restrictions targeted the freedom of association of certain CSOs that were, in that case, regarded as particularly vulnerable to being used for supporting terrorist endeavors. By contrast, restrictions in the context of the COVID-19 pandemic not only but primarily focus on overall restrictions of the freedom of assembly. They are therefore much less well suited to justifying targeted, politically motivated restrictions and more difficult to sustain over time.