The original post was first published on the PeaceLab Blog.

This EDP Wire summarizes the results of the study “Peace and Development 2020: An Analysis of Current Experiences and Findings“, which was conducted at the Peace Research Institute Frankfurt (PRIF) and funded by the German Federal Ministry for Economic Cooperation and Development (BMZ). The report was written by Felix Bethke, Sophia Birchinger, Ben Christian, Melanie Coni-Zimmer, Julian Junk, Anton Peez, Simone Schnabel, Jens Stappenbeck, Antonia Witt, and Jonas Wolff. The entire study is available as open access and can be found here. 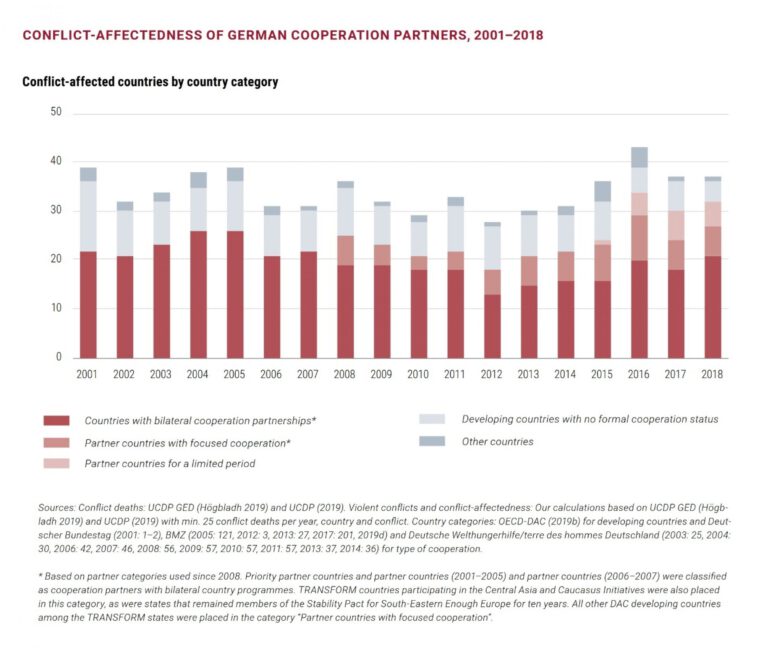 The nexus between peace and development is the focus of our recently published study “Peace and Development 2020: An Analysis of Recent Experiences and Findings”. Based on interviews conducted with 30 international experts, as well as a comprehensive review of policy documents and academic research, it elaborates the state of knowledge on the connection between peace and development. The report analyses current trends, past experiences and challenges for the development-peace nexus and derives practice-oriented recommendations for German and international development cooperation. This post summarizes key findings.

According to the experts surveyed in this study, three global trends are currently shaping the interplay between peace (-building) and development (cooperation). Firstly, we are witnessing a global wave of domestic societal transformations in both donor and recipient countries, which have an impact on the design and the potential effectiveness of development cooperation. This specifically concerns the rise of nationalist, illiberal or in part openly authoritarian movements and leaders, and – partly associated with this – increasing restrictions imposed on civil society actors. At the same time, an upsurge of new protest dynamics and ways of expressing dissent is evident worldwide – from Hong Kong to Chile. Secondly, the experts identify changes in environmental conditions, in particular climate change and related conflicts over natural resources, as central challenges. Even if the exact links between climate change and violent conflict remain unclear, it is evident that climate change functions as a risk multiplier with an enormous potential to destabilize societies. Thirdly, the interviewees observe global political power shifts which are, on the one hand, related to the alleged decline of “the West” and, on the other hand, to the parallel rise of non-Western actors who are increasingly acting as donors in development cooperation and peacebuilding. All three trends are changing the environment in which development, peace and their interplay take place. These changes make it ultimately more complex to design policies that tackle the development-peace nexus.

A Narrow Understanding of the Peace-Development Nexus is Problematic

Problematically, current political debates and political practice are characterized by a narrow understanding of the development-peace nexus. This is criticized by experts from both the global North and South in our study. Particularly in response to the increase in cross-border migration and refugee movements, the priorities of foreign and development policies have shifted noticeably in recent years: The focus often lies on short-term stabilization or security, supplemented by humanitarian alleviation of acute suffering, rather than the creation of sustainable peace. As a result, international (development) cooperation is currently less focused on conflict transformation than on securing the status quo. Despite the ubiquitous emphasis on a prevention agenda, international politics continue to act primarily reactively. In addition, attention is directed to collective, large-scale violence at the national level at the expense of other, local, non-conventional and interpersonal forms of physical violence.

A first recommendation of our study takes issue precisely with this narrow understanding of the nexus: If development cooperation is to take the connection between peace and development seriously, and is oriented towards the goal of peace development, i.e. the simultaneous achievement of development and peace, it needs to be focused on long-term support for transformative processes. This also requires long-term planning, more flexible financing mechanisms and, last but not least, a greater risk awareness and a greater willingness to take risks.

Such a commitment requires working in challenging conflict situations, while having to comply with basic standards of development cooperation, such as acting upon the do-no-harm principle and ensuring the safety and security of personnel. It also means getting involved in new partnerships that go beyond the classic spectrum of development cooperation partners. Many development actors are constantly working in high-risk environments, but not all projects are designed to cope with this risk. It is therefore crucial to communicate transparently which pathways, goals and expectations are associated with these risks. A transformation-oriented engagement in peace development requires sophisticated, context-specific analytical skills and capacities.

Recommendation 2: Implement Findings and Goals on Prevention and Coherence

A key finding of our study is that, while knowledge gaps and uncertainties remain, the biggest challenge is not the lack of knowledge about what works. Rather, it’s a lack of implementation of existing knowledge and policy commitments. Central paradigms of the debate, in particular the primacy of prevention and the principle of policy coherence, are anything but new. Both on the international level and in Germany, a large number of strategy papers and concepts have been published in recent years that provide a generally appropriate framework for promoting development and peace in conflict-affected states. However, these goals and strategies have yet to be consistently implemented.

This applies firstly to the primacy of conflict prevention as a central building block and leitmotif of international peace development. Those who regularly declare their commitment to prevention as a priority of German and international development cooperation must also provide the corresponding financial resources. This requires linking  early warning mechanisms to continuous analyses of prevention measures, as well as more methodological flexibility in the evaluation of prevention measures.

A second central requirement concerns an age-old problem of development cooperation: coherence. It must be ensured at various levels: within donor countries, among international donors and on the ground in states affected by conflicts. In Germany, as part of the adoption of the guidelines “Preventing Crises, Resolving Conflicts, Building Peace” in 2017, various mechanisms were created to coordinate the activities of different ministries. However, these mechanisms are only just being initiated now and should be evaluated at a later stage. At the international level, the debate on the Humanitarian Development Peace Nexus has provided important impulses for an improved coordination in conflict zones, but these also need to be implemented. So far, the results are rather sobering. Consistently implementing the principle of coherence requires innovative organizational designs and institutional change.

The complexity of the interplay between development and peace processes does not lend itself to simple and short-term solutions. Especially in conflict-affected contexts, development cooperation needs sustainable and long-term approaches – which, at the same time, require more flexibility.

This article was also published in German.