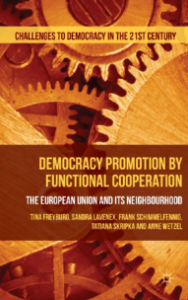 Through robust analysis of the shortcomings of traditional ‘leverage’ and ‘linkage’ models in the EU’s Eastern and Southern neighbourhood, it presents a novel ‘governance model’ that fosters transparency, accountability, and participation standards through functional cooperation between policy officials from democratic EU member states and (semi-) authoritarian neighbouring states. In particular, it examines the impact of democratic governance promotion in detailed case studies of EU sectoral cooperation with Moldova, Morocco, and Ukraine in the policy fields of competition, environment, and migration.

The findings show that countries with a certain degree of political liberalisation that are closely linked to the EU are more willing to adopt substantive EU policy rules and the democratic governance provisions incorporated therein. However, the record is much less positive when it comes to the application of these rules in practice – especially if democratic governance has economic and financial implications for the policymakers and administrations involved. Clientelism and corruption are endemic in the EU’s neighbourhood, and the provisions are to a large extent designed to undermine such practices. Importantly, however, while democratic governance is unlikely to – by itself – engender systemic change, it nevertheless plays an important role in preparing the legal and bureaucratic basis upon which democratic transition can draw.

More about this publication here.