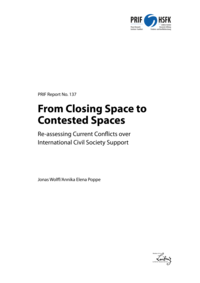 nternational civil society support is facing increasing restrictions in a growing number of countries around the world. Jonas Wolff and Annika E. Poppe analyze the political controversy over this phenomenon of “closing space”. In looking at the global debate in the UN Human Rights Council and at four cases (Ethiopia, India, Egypt, and Bolivia), they assess the normative claims brought forward in order to either justify or reject restrictions on external civil society support. The authors show that governments in the Global South have good reasons to be concerned about the foreign funding of domestic civil society groups and argue that a promising response to the spread of closing spaces cannot but include a serious engagement with these concerns.